Hits : 6837
Introduction: As I write this I find myself wishing I had taken notes along the way. There are details that got lost in the mix, comments made by many...

Hits : 3796
How to Enjoy iSurfedThere Not quite sure how to navigate the site? This will get you up to speed in no time. 1. Get Registered To fully enjoy the site, you have...

Hits : 3347
The mission of iSurfedThere.com is to create an association of like minded people who enjoy surfing and the surfing lifestyle. The purpose of the website is to become a place...

Hits : 2426
THE KIDDIE POOL? If you took a poll of long time San Diego surfers asking for their opinion of the most dangerous breaks in the county, your top ten would certainly...

Hits : 1723
Ocean Magazine did this great five page article on Joe in a recent issue. Here are all five pages in JPG, with the full higher resolution PDF posted below. Way... 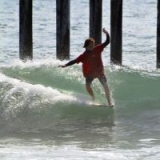 Iconic wooden pier in the heart of San Diego

I Surfed Here!
1466
View all sessions

I didn't have much hope for surfing today as soon as I turned down Tourmaline Street. The parking lot had maybe 10 cars in it, and the water and sky were gray, gray, gray... The tide was up, and the dull mushy shorebreak did not look in the least inviting after all the good surf we've had this year.

It looked as if the pier was my only hope, which turned out to be true and then some...

I rolled up next to Josh Hall's truck at the end of Felspar.

"I thought you were in Hawaii." says I.

Just then the first parking spot right next to Tower 23 opens up.

A quick wax and change into the wetsuit under parting skies and I'm down the bluff before I know it.

As I hit the water, I'm oh so pleasantly surprised! Distinct A frames and raging waist high little freight trains are pouring through with regularity next to the pier and again another hundred yards or so north. Bitchin! Like fish in a barrel as the saying goes.

There were four other people out during my session, which totalled maybe 45 minutes, and there wasn't a whole lot of experience in the crowd, There were probably ten times that many people on the pier. I must have scored 12-15 waves in that three quarters of an hour, mostly lefts but also a couple rights that got really interesting on the inside.

Many of the lefts took me waaaaaaaaaay north, like at least a whole block to Emerald Street. A handful got ridden into knee deep water, their form holding the whole way in, still offering up little thrills for successful trimming and well executed balance.

Oh and the water was like 66°F, the showers work (unlike Tourmo), and the waves actually have some snap to them... I'm sure I'll be back.