rolex
At present, the best Rolex Replica are Swiss movements, assembled in Hong Kong, white steel color is 316L steel or 904L steel, gold part is 18K gold or rose gold, work fine, accurate and stable walking, men should Have a 1:1 replica rolex , it is cost-effective, excellent workmanship. Buy your rolex replica here.
My IST Favorites - I Surfed There! | I Surfed There! | 2019

Looking for Something? Surf Check!

Need help finding your way around?

Hits : 20061
Introduction: As I write this I find myself wishing I had taken notes along the way. There are details that got lost in the mix, comments made by many...

Hits : 5406
How to Enjoy iSurfedThere Not quite sure how to navigate the site? This will get you up to speed in no time. 1. Get Registered To fully enjoy the site, you have...

Hits : 4499
The mission of iSurfedThere.com is to create an association of like minded people who enjoy surfing and the surfing lifestyle. The purpose of the website is to become a place...

Hits : 3950
THE KIDDIE POOL? If you took a poll of long time San Diego surfers asking for their opinion of the most dangerous breaks in the county, your top ten would certainly...

Hits : 3620
Ocean Magazine did this great five page article on Joe in a recent issue. Here are all five pages in JPG, with the full higher resolution PDF posted below. Way... 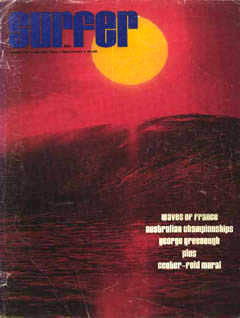 Blasts From the Past

One day I'm hanging out at my buddy Glen's house - and this is about halfway through my two month long love affair with these two boards - when over pops his friend and neighbor Denny Clark. Denny is an old timer from Orange County and has some pretty cool stories that he can back up with some amazing surfing memorabilia.

So anyhow we get to talking about surfing, and before long Glen says "Hey Denny, go grab some of your old Surfer mags and show Vince!".

Denny is back in a flash with a stack of 15-20 tattered old treasures, and Glen and I immediately start rifling through them (with reverence of course!). A little more BS ensues until at some point Denny says "Hey fellas, I gotta go. You hold onto those for a while."

I hang out for a little longer until G has to bail, and he says "Pick out a couple and take them.", so I grab Volume Eight, Number Three from '66 and Volume Ten, Number Four from September '69. Little did I know how fortuitous those choices would be when it came to writing this aritcle...

It's amazing how much changed in three short years - in surfing, in music, in art, and in the whole of American culture. The 1966 edition looks so much older, with maybe half the number of color images of the later mag, and a conservative layout that would not have looked out of place a decade earlier in the '50s. Noticeable exceptions include the Rick UFO ad and the Harbour Surfboards ad near the back.

In contrast the 1969 edition is chock full of colorful eye candy front to back. The layout of the Hobie ad on the inside cover isn't particularly brash, but for 1969 the surfing sure is.

Quite a Lucky Day

But it's not just the layout of the magazine and the ads that has me amazed, it's the content!

The '66 has as its featured article the pronouncement of David Nuuhiwa as the Number One Surfer in the Whole Wide World! (World Championship Contest results be damned!) - along with another lengthy article in which American surfers Corky Carroll, Nuuhiwa, and Mike Doyle retort the Aussies' assertions that there was a new paradigm in surfing, and that it was coming from Down Under. One could argue that this assertion has more basis than just contest results - McTavish's radical power surfing on vee bottom longboards was every bit as impressive as Nat's results in Ocean Beach.

Just three short years later and the '69 issue seems to have come from a whole 'nuther planet! Every ad is dripping with sexual innuendo. The page 3 ad for w.a.v.e.Set fins really sets the tone that sex sells!; a tone that will ring on almost every page thereafter! Check the Challenger ad around page 23 - "Our curves, like Benita's, are designed to get it on!" Hahahaaa! Yowza!!! Good luck getting ads like that into Surfer Magazine today! One would think that all of those trips to French shores must have had some influence on the magazine's editors... Oh yeah, and as for the surfing, the center spread article is all about Billy Hamilton, Mark Martinson, and Keith Paull surfing France on their vee bottoms, all filmed by MacGillivray and Freeman... hmmm... prescience! And Billy Hamilton's writing is superb; it's obvious how lucky Laird was to have such an amazing father figure in his life.

In short there is so much more that could be said about these wonderful old treasures, but I don't want to bore you with any more of my rambling when you could be leafing through them yourself, virtually at least. And we've got Alexis rankings to think about, right? We're gunning for top spot and we can't lose even one reader to boredom! Haha!

So I leave it up to you, dear reader, to find these nuggets for yourselves. In that spirit, here are full scans of both mags in PDF format for your viewing pleasure. Just click the thumbnails below to see them (or right click to save to your hard drive). Enjoy! 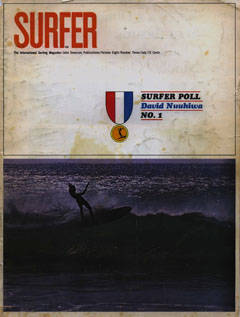 Sidebar to the Sidebar:

Oh yeah, I should also mention that I performed OCR on the scans, which means if you're so inclined, you can search the text of both mags for whatever you like... perhaps compare "Frye" and "Hynson", "Bing" and "Bong", "he" and "she", etc. Or whatever.